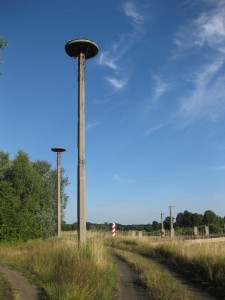 Just over a month ago, I visited my mother’s birthplace, Forst/Lausitz, an unassuming town located on both sides of the Neiße river, intentionally developed as a production center for textiles and cloth in the 18th century by the Saxon statesman, Carl von Brühl.

Like his nearby palace, Pförten, Forst was devastated by a repeated change of hands; from the Seven Years War to the end of the Second World War the geopolitics of Central Europe determined its fate.  In 1945, as the Ukrainian divisions approached the Neiße, the German army gave the order to blow up all the bridges that connected the eastern side of the town with the west.  And so the bridges have remained; like snapped off rods, jutting out across the river and its low banks.

As a child, the mysteriously overgrown and unattainable other side of the river haunted/taunted me.  Innocent of the consequences, one afternoon, while our parents were visiting old friends who lived on the cobblestoned street that ran along the river, my sister and I went down to the bank and she asked me to take her photograph.  I dutifully obeyed, only to be accosted by an East German border guard who demanded to have the film from the camera.  Taking photographs of the state border was forbidden.  My mother, who must have been watching from the window, flew downstairs and explained to the incensed border guard that we were just children, how did we know that those prettily striped poles on either side of the bombed bridge signified a geopolitical flashpoint?  He looked at her with sheer amazement and then took our film. 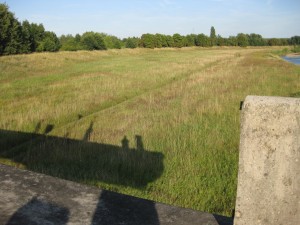 Since that moment, borders have evoked fear in me.  Maybe from an early  encounter with the invisible lines drawn through cities and landscapes that have the power to trigger “the shoot to kill” policy of the inner-German state division, or traumatic experiences at US immigration checkpoints, I await the moment where my right to travel across that bridge, or through that port of entry, is revoked.  And, if Apter is right, maybe that is why I have been drawn to translation theory and its subsequent field of study in a romantic mission to rebuild those exploded bridges.  Maybe I too have been guilty of what she identifies as the attempt of translation studies to use “border crossing” as a prime metaphor of general equivalence (Apter 2013, p. 101), a location of meaning exchange and inter-disciplinarity.  Maybe I too see the new German/Polish border crossing just up the river from Forst, where the checkpoints were built but never used, as a “space of flow” in a new European world order.  This  travel  without checkpoints, however, does not take us to a translation zone of positive interchangability.  It produces a narrow zone where the Euro and German are the accepted currency, where Germans go to buy cheap petrol and cigarettes (and maybe a bunch of flowers, too) and then hastily return home, away from the gazes of the linguistic and cultural other.  Drive too far out of this zone, and you pay with sloty and  communicate in Polish.

So, what is Apter’s project with this provocatively named volume that positions itself immediately as an “against,” invoking the dialectic that she claims to so vehemently oppose in her chapter on chronology?  Is it to expose translations as “instruments of global consumption”?  Is to to argue for the de-provincialization of the canon?  Is it, to extend the eating metaphor from yesterday, to introduce “indigestibles” to this mass consumption (her style serves this purpose well) and then to make of the indigestible untranslatables the “fulcrum of comparative literature”?  Is it to foreground a kind of “glossolalia” that defies translation, a speaking in (non-referential) tongues that no-one understands? How does she deal with the semiotics of the Untranslatable that evoke God, logos, truth, Derridean transcendental signifieds?

What Apter claims to be promoting is a translational activity of “verkehrte Wahlverwandtschaften”, disruptive elective affinities that replace the organic ones, the false friends of translation that lead us down the slippery path of assumed equivalence (think for example of the horrors of the “Handy” or “Public Viewing” in German).  Or a World Literature that is “an experiment in national sublation that signs itself as collective, terrestrial property.” (p. 15)  More “War and Peace”?  The example she provides of such a successful translation and production of World Literature is Alain Badiou’s hypertranslation of Plato’s Republic, a work that demands both the closest of readings, “channeling Plato” (maybe understanding Plato “on his own terms” pace Lefevere), absolute comprehension, and what I would call an adaption where the cave becomes a movie theater.  The untranslatable, as the Stein des Anstoßes, produces new knowledge, it becomes an “epistemological fulcrum for rethinking philosophical concepts and discourses of the humanities.” (p. 31)  And hopefully not a fetish object of the new world order.

This then would seem to be the reason for her fascination with the Dictionary of Untranslatables.  Celebrating mistranslations, sophistry, and logology, Apter invites us to to survey this cartography of philosophical differences.  Writing about the entry on “pravda” Apter sees the untranslatable as “militant semiotic intransigence,” the remainder of translation that has the potential to undercut national language ontologies but still resorts to nationalistic essentialist thought (you know, my Weltschmerz is not accessible to you because only the Germans feel it in their Waldeinsamkeit).  Can the zone of untranslatability become a new Habermasian  public sphere, a negotiation zone between languages and cultures that undercuts nations?  And how can we fit World Literature into such a zone?  Does it then consist of an “enlightened common culture,” an ecologically aware “planetarity,” a literary world system that foregrounds a poetics of difference and a cartography of scale that is the very stuff of Comparative Literature?

This zone of untranslatability might be so large, so filled with the HUGE DATA of world literature, that only the philological tools of the telescope/microscope in Moretti’s Literature Lab can navigate it.  How do we read so much and not reduce it to the easily digestible pap of globalized fast food?  Reaching for the utensils of systems theory, Moretti developed the mathematical modelling of the dynamics of the economy, the spread of disease, the neural networks to examine the evolution of literature (the novel as a genus-gene-genre).  Only in exile, she claims, he claims, do these genres bear great fruit.  “Are new genres made by virtue of translation failure? Does differentiation come at the expense of hybridity? (see Apter 2014, p. 50).  Forgiving his Eurocentric focus, Apter recognizes the potential of Moretti’s notion of a global web/system.  She sees his quantitative formalism as a way in which to map/grid the small/micro politics of a literary work to the global/macro political context.  Such excitement in the hyperbole of Stanford’s Literary Lab, who describe  themselves as space men exploring the great unmapped territories of the great unread oeuvre of the novel, might be a way forward for the field.  But I don’t think Apter is quite sure, yet.

If we might be able to create a translation zone with the DH tools of Stanford’s Literary Lab, we must still beware the traps of periodization.  In the discussion of three core courses in Comparative Humanities we have these discussions all the time.  How do we deal with the given that critical traditions are embedded within European typologies? How do we navigate the totalizing nomenclature of World Literature (Chinese art, Japanese modernism, Russian music)? How do we develop a translational literary history that is not determined by “fetish dates” of Eurochronology? 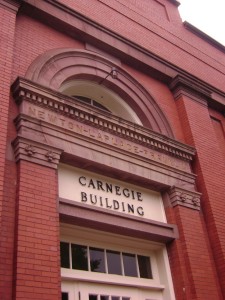 Our colleague at Penn State Eric Hayot proposes breaking down periodicity by focusing on one year and then building out from that (we started HUMN 250 like that); our ex-colleague Kathleen Davies points out the link between periodization and cultural political categories (exemplified in the names around the Carnegie Building on campus-a prime example of “tycoon medievalism”).

Like Nietzsche, we should instead reject the Hegelian dialectic, disable linear history, and subvert periodization, producing a “verkehrte Geschichte,” thoughts that are not of the season in sequences that perhaps reflect more of a Benjaminian sense of the “Jetztzeit.”  The action of politics on time, an Untranslatable now.

In her interrogation of world literature and translation studies, Apter may frustrate the reader with a style that deliberately trips us up with incessant bibliographical references, complex sentences, and obtuse neologisms and revived archaisms.  But this also wakes the reader up to the potentially sloppy thinking that has accompanied the spread and study of world literature and the practice that makes it possible, translation.  Border zones, interlingual and intercultural spaces should not be seen as places of equivalence but rather thresholds of untranslatability and blockades.  But, in order to be able to argue this, Apter has chosen her borders carefully.  How would she parse the discrete “Mauerweg” that surrounds what was West Berlin.  Where once the “Todesstreifen” signalled the impassable divide between eastern and western bloc, there is now a bike path, flanked by blind lampposts, curved like shepherd’s crooks, that has melded into the landscape.  Unlike the bombed bridges of my mother’s hometown, here is an untranslatable border.